Inside of China WeChat has become a large news source for users, and just as Facebook and Twitter news can rapidly spread on China’s largest social network as well.

With over 1 billion monthly active users people use WeChat to chat, play games, call, pay bills and shop, all of that without ever leaving their app. As a move in Tencent’s continuously effort to battle rumors and fake news the recently released a so-called mini-program (a light app that lives inside WeChat. The mini-program once subscribed to post the top ten rumors every month to display and spread awareness about the recent rumor and false news which has been debunked. Users are can then help to spread awareness through friends and groups. Recently debunked rumors ranging from that it would be extremely dangerous to use microwave ovens to apps claiming that they could scan and detect counterfeit currency. It also has the ability to send you a notification on WeChat if an article you’ve read has been debunked. The mini-program claims to have around twenty-five million users and that it has debunked millions of articles so far, leading to punishing over 200,000 public accounts. 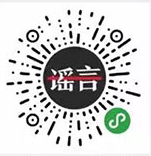 Scan and try yourself!