Branding, identity and logo design are the three musketeers of a business’s image, banding together to convey the purpose of a product or service to consumers. And as consumers have more options on where and what they spend their money on, the combined use of these three marketing efforts helps a product or service stand out against competitors. The question we ask here is, if, collectively branding, branding identity and logo design are important in crafting an image of a product or service, then what value do they offer individually? Here is a clarification of their stand-alone functions. 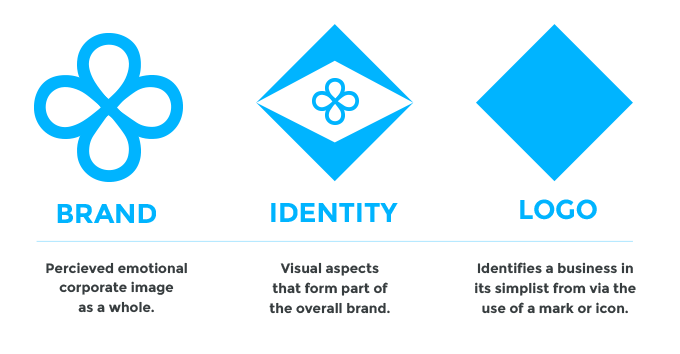 A brand identifies what it stands for by promising and delivering specified interactions, experiences and expectations. As stated before, businesses are in competition with one another, due to greater customer choice, which means businesses having to work harder to find ways to separate themselves from the crowd. Branding helps with this aspect by developing a relationship with consumers over time and establishing a positive reputation incrementally, through the use of a succession of interrelated advertising campaigns. Consumer perceptions are everything where branding is concerned, with a brand informing a consumer of what it represents and its ability to deliver on this idea as practically as possible. With an emphasis on consumers’ emotional responses, the influence of a brand is augmented or lessened based on the frequency of opportunities to interact with the brand and how these communications are received by its audience.

How successful a brand is at distinguishing itself from another is determined by its continuity – meaning how effective it is at continually embodying a business or company’s image as a whole. A product or service must be consistent with the messages it communicates both internally and externally. For example, its name, logo, and color scheme has to appear cohesive with the ‘personality’ it is trying to project. Elements such as these are integral when engaging a target audience as they stimulate feelings of clarity, familiarity, and reliability.

A brand is emotionally powerful as it becomes relevant to customers in their everyday lives, adding value that a competitor is unable to do. As an example, let’s look at American multinational technology company, Google. Google encourages its customers to pursue their passions and not the features of its services, by branding the services instead of selling them. When using Google’s search engine, a user can identify and search for what they want, but the focus is not on what the feature actually does, but how it makes one feel.

Its mission to bring the world together through technology is clear through its advertising campaigns such as “The web is what you make of it” where Google articulates its ethics, beliefs and what it stands for. It is through evoking such reactions that Google can relate to its users, becoming a mainstay in their minds and actions, allowing Google to delve into new places in society’s consciousness. This is best demonstrated by the way Google is referred to, as it has found its way into the everyday language often referenced as a verb (“Google it”) when a problem or query needs resolving.

What is identity design?

If a brands mission is to generate feeling, then tools are required to assist with this goal, which is where identity design comes in. Identity design is the use of design to develop a perception of a business or company through how it appears visually. Applying a well-defined business image (logo, layout themes, colors, etc.) helps to enable customer response as it produces top-of-the-mind recognition from a target audience.

When looking at American carbonated soft drink Coca-Cola, one can easily identify the product by the shape of its glass and plastic bottle as well as its distinctive white cursive font. You can also see the personality Coca-Cola communicates through its use of the color red, which represents excitement, youthfulness, and spiritedness. These elements help the brands character and are evident in all areas of business. Other areas of business may include Stationery, Marketing Collateral, Apparel Design, Signage and many types of media. Through the consistent use of the visual aspects of a brand, a connection between a brand’s culture and its organization can grow.

What is a logo?

A Logo’s primary job is to create a first and lasting impression of a brand. It is essential that a logo serves as a visual reference, instantly, to a brand, so it is easier to attract and retain customers. A logo can be a symbol, icon, monogram, badge, sign or other graphic device with a central objective to ‘speak’ to a customer quicker than words. Projecting a brand’s relationship is what a logo lives for, often captioning the meaning behind a product or service, to boost recognition. The meaning of a logo is more relevant than how it looks, however, there is an art to creating one. As exemplified by Coca-Cola, color plays a big part in translating messages, with different colors arousing different emotions.

For example, American multinational technology company IBM’s use of the color blue indicates trust, security, and strength, which translates to their products.  IBM also uses vertical lines, associated with strength and masculinity which unconsciously connects consumers with their mission to manufacture efficient computer hardware and software. So, in its simplest form, a logo aims to garner reconcilability and familiarity of a brand.